Book signing where the wheel came off

It would never have happened to Annie Raymond, the PI heroine of the 3 books out in paperback, being signed in York on Saturday 27 November. Wheels, both real and virtual, escaped their moorings in an attempt to upend one or both of the book signings.

WH Smith, Coney Street, to start with: we met some great people, both readers and writers. The store manager, Chris, gave us a special 3-book offer, and we ended up selling more books than ever, and certainly more than we'd hoped for given the mini disasters related below. The one regret was inadequate time to explore the store itself, which is an Aladdin's cave over two floors. However, we'll be back in the New Year.

It was the metaphorical wheel that fell off before the real one. We were alerted in a phone call a few days before the event. Stock glitch. The posters were up, customers were asking for the books, the press had shown an interest, author and agent had committed the (not so simple) itinerary to memory, but no books had been delivered and none would arrive in time.

Thank heavens for private events and that the agent was holding some stock, but it meant he had to arrive with both the author and the books. The author is self-propelling, but he had to borrow a sack barrow to transport the books. The distance between car-park and WH Smith, Coney Street, York, is short (ish) but plays out the varieties of the historical town. Steep hills, narrow gaps, cobbles, twists and turns. The loaded barrow raced along with a penetrating rattle that cleared a path through the crowds. It was the return journey, empty, bouncing back over the cobbles, steps and twists of York's streets that one of the wheels flew off.

Interlude: busy intersection; escaped wheel; author wrestling to keep 3-legged barrow in control whilst agent risked life and limb dodging traffic to rescue the fourth wheel before it was squashed. Happy ending with thankfulness for the general good-nature and tolerance of the British motorist, content to be entertained by the antics rather than annoyed at the obstruction.

And thus on to Monks Cross having a barrow with only 3 reliable wheels to transport a stack of books that must not be damaged. The question that loomed large was how close will we be able to park. The answer turned out to be 'not very'. But happy with a good event in Coney Street and unaware of the law awaiting us at Monks Cross, we set off... to be continued in next blog.
Posted by Penny Grubb at 22:09 3 comments:

The long arm of the law tackles author crime in Hull

Signing books in WH Smith, Prospect Centre, Hull is a dodgy business, especially when someone tips off the authorities that it is crime from cover to cover. 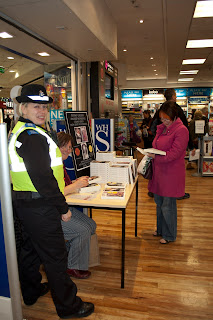 Annie Raymond, PI heroine of the three paperbacks just out, would have anticipated this and made provision. For the author, no such option. With store manager, Adam, having done a great 3-book deal, the books flew off the table and I signed with ever greater care. It's a strange phenomenon that once you sign your own name again and again, you start first to forget how to spell it and then to have doubts over what it actually is.

For an author, there is no better place to sit and sign books than WH Smith, Prospect Centre, Hull. It's a busy hub, an amazing store and fascinating just to watch the crowds come and go. Store manager, Adam, runs a bustling book shop in trying economic times, for which he deserves a medal. He is also well known as a supporter of local authors, whose books sell well from his shelves. Sales at this signing broke previous records, which is exactly the result we were all looking for.
Posted by Penny Grubb at 17:00 3 comments:

As the author of the Annie Raymond PI series, first 3 books just out in paperback, I find myself falling more and more into investigator mode and questioning the motives of people I meet. Are they telling me the truth? Does what they say add up? Are there any signs of a hidden agenda?

But why would I suspect a photographer from the Beverley Guardian?

She came early to the signing on Saturday 19 Nov, before we'd started really, and took some pics of me with store manager, Philip, who runs one of only a handful of the 'books only' WH Smith stores in the country. He also runs a conventional WHS just up the road. He's a busy man.

We chatted with the photographer, who happened to mention the rest of her itinerary for the day. Her next but one assignment was in Out Newton (for those who don't know the area, that's a long way on twisty country lanes) and she was due to arrive ten minutes after leaving us. Surely she would be very late for that appointment and would get successively later as the day wore on, arriving at the final garden party just before midnight.

Was her relaxed demeanour just consummate professionalism or was something else going on? Did I hear a very distinctive noise in the background a moment after she left? I don't know for sure, but what I do know is that when I arrived, I spotted an old-fashioned police box at the corner of Toll Gavel. It wasn't there when I left!

Local author, Linda Acaster, dropped in, also with far too much to do but no time-machine to help out. We agreed that the world would be a better place if people could take more time out to sit back and contemplate the world around them. We couldn't enlarge upon the theme, however, as we both had other places we had to rush off to.

The signing went well. But maybe it's the Beverley Guardian that has the real answer...
Posted by Penny Grubb at 11:37 2 comments:

Yorkshire based crime series out in paperback 3 Dec: WHSmith, Scarborough

There are lots of reasons to come to Scarborough at any time of year and here’s another.  The international award winning crime series featuring PI Annie Raymond is now out in paperback.  WHS are doing a special three-book deal.

I will be in WHS Westborough, Scarborough signing books from 12 to 2 on Saturday 3 December.  Do call in and say hello. 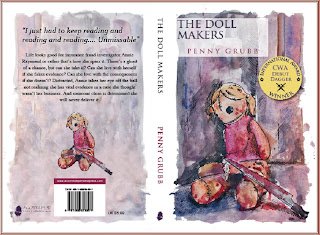 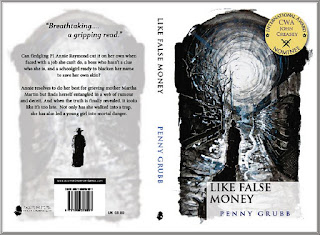 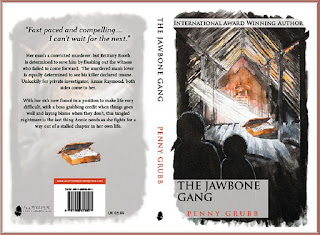 
Yorkshire-based private detective, Annie Raymond, is out and about in paperback and in York.  Saturday 26 November. WHS are doing special deals on the trilogy at £15 the set of three.  Books include the international award winner, the Doll Makers.

Do call in and say hello if you’re in the area.

WHS Books, Toll Gavel, Beverley is one of just a handful of dedicated book shops in the WHS chain.  I’ll be there from 9.30 to 11.30 on Saturday 19 November hoping to draw in the crime lovers.  Last time I was here, we were joined by a local MP and a set of local authors.  I haven’t canvassed parliament, but I’m hoping to catch up with the local author circuit.

Annie books now out in paperback and WHS Prospect Centre, Hull are selling them on special offer.  The trilogy for £15.  I’ll be there from 12 to 2 on Saturday 19 November in amongst the Christmas shoppers hoping to covert some new readers to crime.  Last time I was here, the law intervened, but we’re hoping to get away with it this time.

The Durker Roods Hotel stands back from the road in Meltham and looks busy despite a lack of any useful signage to bring people in. We managed to miss it first go, having been minutely directed from just 200 yards up the road. However, it was worth finding. With several hours between our Ladykiller event in Meltham and one in Slaithewaite at the library, we stopped off at the Durker Roods to relax for a while in the way that writers relax best and to have a bite to eat.

And so on to Slaithewaite... I left the homicidal SatNav in its box and followed Ladykillers Zoe Sharp and Lesley Horton on the winding route to Slaithewaite library. Given Lesley's reading in Meltham about how insurance fraud accidents are staged, I was wary pulling out behind her at junctions, but we arrived intact.

Slaithewaite has a lovely little library with an air of busyness; a place that people use. Great to be there at this time of uncertainty for libraries. And this event was full. And again it was a very enjoyable event to take part in; a welcoming crowd, a lively Q&A and a welcome Yorkshire cuppa.
Posted by Penny Grubb at 17:46 2 comments:

The first task for me was to meet up with fellow Ladykillers, Zoe Sharp and Lesley Horton, prior to our joint event in Meltham. And that was easier said than done. Our SatNav works to the millimetre anywhere south of the Humber estuary, but doesn't like Yorkshire at all.

Everything was going well as far as Huddersfield town centre where the road layout must have changed. Having been directed into an oddly curved side street, I felt a reluctance to follow the instruction to 'turn left' up and over the brow of a hill. I listen to my instincts. I'm a writer. And what a good thing. A moment later, two lanes of cars poured over the brow showing clearly this was a one way street - and a busy one - in the other direction. I turned back and took a random main road until the little arrow (and my nerves) had settled down enough to take me on a safe route through the town.

My next moment of distrust was when I found myself heading "for 2 miles" up Halifax Road because I was fairly sure it ought to be Huddersfield Road, but still it seemed roughly the right direction so I sailed along up a hill to a big roundabout where I was to "take the 5th exit" which proved to be back the way I'd come so I thought perhaps there would be an immediate left turn that had necessitated doing a full loop of the roundabout. Not a bit of it. I was urged to go back down Halifax Road "for 2 miles". I was in a SatNav loop.

I stopped and reprogrammed it with a more generic Meltham address which took me back down Halifax Road, across to Huddersfield Road and on up to Meltham where it stopped me a mile or so short of my destination. From there it took only three phone calls to Zoe, two enquiries from passers-by and a posse sent out to search for me and I'd arrived.

The Carlisle Institute is an imposing building with high-ceilinged rooms, in demand for all types of events.
For our event there had been a ticket mix up, the message had gone out that tickets were sold out before they were, which kept the numbers below capacity. But that didn't matter. It was a lively event with a well-engaged audience who kept the question and answer session going well beyond the appointed time.

I was given a wonderful cup of tea in a usefully sized mug. For someone who has just spent a week at a conference in Slovenia desperate for a Yorkshire cuppa that was a real treat. In fairness, I should add that lack of 'proper' tea was the only downside to Slovenian catering which was otherwise outstanding.

And so on to Slaithewaite...
Posted by Penny Grubb at 17:37 No comments: