Hastings, the sand! It gets everywhere

Having been watching ITV’s excellent adaptations of Agatha Christie’s Poirot, I found myself in a position to quote the Belgian detective today as we walked on the beach. 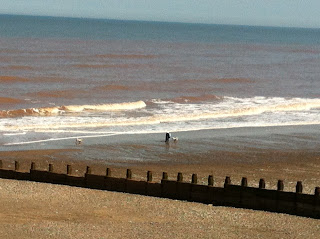 Beautiful sunshine, just a bit of a breeze. The tide was on its way out leaving us to walk either on the sloping stretch near the top of the beach – pebbles but dry sand – or the flatter sandy bit which tends to mini quicksand when the sea has just left it. 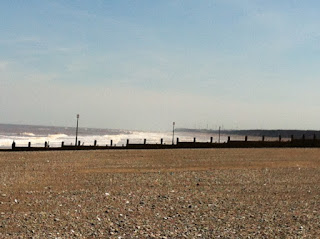 Not that we were going to disappear up to our necks, but it has a way of seeping inside the shoes. 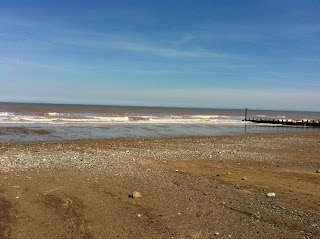 First time this year we’ve seen people in the sea, though they had to battle through surf and wade a long way out to be deep enough to swim. 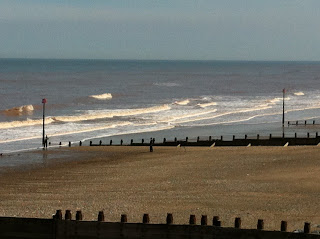 The title is a quote and not a location. Not Hastings at all, but East Yorkshire.
Posted by Penny Grubb at 21:33 No comments:

The Public Woman by Joan Smith
My rating: 5 of 5 stars

I was not without reservations when I picked this one up and began to read. I had no doubts it would be well-researched, would cover ground that needed covering, say things that needed to be said and I knew that all in all I was going to be in sympathy with its general message, but I wondered if it might be hard-going. Would I feel preached at?

Well, I couldn't have been more wrong. It was riveting. It was fact-heavy and fascinating. I was captured from the opening paragraph of the introduction. Sure the subject matter is pretty heavy, but the treatment was deft and enthralling. I had to make myself put it down at the end of the Intro to get on with my day job, but I’d finished it by the end of the following day.

The opening chapter on modern narcissism gives a fascinating insight into the lives of some celebrity women (without patronising them – there’s a refreshing change). The chapter on FGM is grim – it couldn't be otherwise – but it’s a stark and badly needed reminder that this is a global problem, not someone else’s. It was interesting to see certain press cultures laid bare from within, elements from the Leveson enquiry that didn't make it to public consciousness. And in amongst the many cases quoted, I was pleased to see a detailed exploration of the appalling case of Amanda Knox, crucified not only in an Italian court, but also in the press in the UK and USA; all this not only in the absence of evidence against her, but in the face of evidence that backed her innocence of the crime for which she was convicted. Shades of the conviction of Edith Thompson. Thompson’s conviction for murder was essentially censure for her extra marital affair. Knox’s was disturbingly similar, but this is the 21st century, for heaven’s sake, not the 1920s.

We've come a long way, but Smith provides a timely (and extremely well written) reminder that we've a long way yet to go.


View all my reviews
Posted by Penny Grubb at 22:30 No comments:

And a cat called Tomate

L'Auberge by Julia Stagg
My rating: 5 of 5 stars

This book came labelled as Joanne Harris meets Clochemerle. It's a long long time since Clochemerle and I can barely remember it, but I love Joanne Harris, so this had a lot to live up to. Did it make the grade? Yes, I loved it. The Websters, the English couple who fell in love with a small part of France and wanted to make it their future, find reality hitting them in the face with the minutiae of French politics. Papon, the Mayor, makes a superb baddie but he's a 3D person, not just someone to boo every time he steps on to the page. The various facets of village life play out beneath the often unseeing eyes of the Websters who struggle with everything from the language to building regulations. Each member of the cast brings his or her own surprises as the different strands of everyone's life weave in and around each other towards the denouement, but don't think you know what's coming - there's a wonderful final twist. It's beautifully observed and written, and I'm not surprised to learn that tourists go looking for Fogas believing it to be a real place.
And the icing on the cake for me was the cat called Tomate. A real Joanne Harris touch.

View all my reviews
Posted by Penny Grubb at 20:02 No comments: