A very busy book launch for the Doll Makers on Saturday. The livestock in cars element was unplanned. Not everyone in the crowd bought the Doll Makers but enough did that the shop was left with only three copies after an hour. Huge thanks to those who came and I hope you find the book worth it. And huge thanks too to the team in the shop for their efforts and also for being a good book shop in these difficult times.

I had to fight my way into the shop at 11. I’d love to say it was through a crowd of people waiting for me to sign copies of the Doll Makers, but of course it wasn’t. It was just the usual Beverley book-buying public out in force.

Not only was the local book-buying public out in force, but also the local authors. The picture shows (left to right) Karen Wolfe, writer of comic fantasy, creator of Granny Beamish; Valerie Wood, award-winning author of historical romance who regularly keeps the big names off the best-seller top spots in the local charts; another Valerie – Stuart Aken’s wife. Stuart, a prolific and award-winning writer was behind the camera. His credits include TV and radio as well as his award-winning short stories and more recent foray into novels. Gemma Noon peeping round from the back, creator of the Literary Project, basking in her first publishing deal. Penny Grubb, with her best signing pen, author of the award-winning crime novel, the Doll Makers, and Avril Field-Taylor, crime writer and creator of Georgia the singing detective. 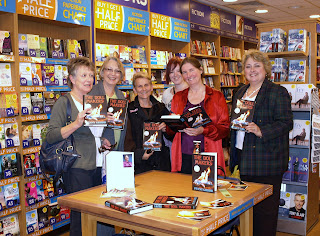 Post signing, we went to the pub to relax and chat. Those with further to travel left after a King’s Head Hotel lunch. Others returned with Penny to Lilac Tree. The general eating, drinking and merriment went on into the evening. The first of the livestock-in-cars stories was told to a small contingent as they made their way back to the farm. The full (fraught) tale will have to be told elsewhere, but it was interesting that it should be told at all, given that the recipients arrived back just in time to hear of another (completely independent) case of a sheep travelling in a family car. The driver this time was stopped by a motorway policeman. All the papers were in order and the driver was allowed to proceed, albeit after the sheep had been buckled into a seat belt. But the part that will always stick from this story is the policeman’s opening gambit. ‘Madam, are you aware there’s a sheep in your car?’

The odds against two independent sheep-in-car stories at a book signing for a crime novel with no livestock angle, have to be pretty high, so I take this as a good sign. The next time a good thing happens to me, I will be able say ‘I knew that would happen. That’s sheep in cars for you.’

Big thank yous to Danny and Gabi for their superb hospitality; also to Jennifer and Suzanne for mouth-wateringly delicious cakes.

It was great to see everyone. Thanks for coming.
Posted by Penny Grubb at 12:09