An amazing close up encounter with a sparrow hawk

It came in low and fast, over the Indian bean tree, between the pear and the honeysuckle and straight at the window of the study where I was sitting looking out. I’m on the ground floor. This is not an obvious flight path for any bird. Clearly after prey, or whatever it saw that it thought was prey, it screamed in and stopped a millimetre from the glass in a deafening clapping of wings, did a lightning midair reverse manoeuvre and sped off. For a fraction of a second we were eyeball to eyeball.

My camera was right beside me. Did I get a shot of it? Not a chance. It was on the return flight over the Indian bean before I got it together to leap up crying, ‘Aagh!’ In that fraction of a second, I really thought it was about to crash through the glass into my face.

Lame I know but I took a photo of the window. You have to imagine the alarmed ball of feathers, beak and talons mid-shot. 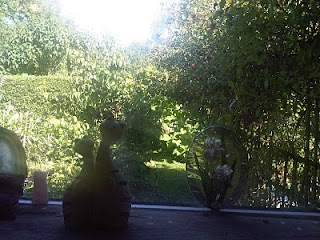 I wonder if this was the same bird that alarmed me the other night by crashing into the window of the lounge as I was watching TV. It lay stunned on the ground under the window, so I raced round to help, but the moment it saw me, it took off like a surface to air missile. Maybe just now, at that moment we stared into each other’s eyes, it was thinking ‘Not you again.’
Posted by Penny Grubb at 14:20