It’s a real privilege to have been asked to interview this group of very talented authors for Fantastic Books Publishing’s Fusion spotlight. There are some amazing admissions, surprising secrets and fascinating insights to follow in this series of interviews. Fusion itself is a brilliant anthology – twenty-five of the best tales of sci-fi and fantasy.

My first interview is with prolific author, Stuart Aken. Stuart describes himself as a husband, father, novelist, playwright, short story writer, blogger, word wrangler, committed agnostic, romantic open-minded radical liberal, sometimes dangerous to know. He was born, against the odds, to a widowed artist, in a neighbour's bed, raised by a mother who knew what love meant and a step-father who lacked imagination but loved and educated him in things natural and worldly. Stuart tells me that he wrote the wrong things for half a lifetime, until he learned who he was and understood his opinion was as valid as that of anyone else. 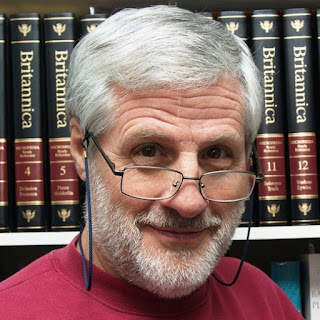 Anyone who is familiar with Stuart’s writing will know what a compelling tale he can weave. I wondered which of his own stories he would recommend to someone wishing to fight the tedium of a long haul flight. He had many to choose from, but went for one of his science fiction pieces, saying, ‘The Methuselah Strain is a science fiction novelette set on a not-too-distant future Earth. Those who’ve read the book, and commented, have found it absorbing and compelling, so it should distract your attention enough to make the time whizz by. There are no references to air travel, so you won’t be induced into panic by a simulated crash, but you might find yourself considering the message once you’ve finished and you doze off toward the end of your long flight.’ 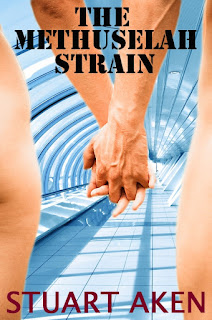 Taking the flight theme up into space, I wondered how Stuart would see Earth through an alien’s eyes. Mentioning something he’d written a while ago, he reminded me, ‘I made this the subject of a short story. It featured in Ten Tales For Tomorrow: A Gastronomic Treat at the Edge of the Galaxy.’

This ‘light-hearted’ tale is presented in the form of a spoof review by a restaurant critic. I read it several years ago. It’s one of several of Stuart’s stories that have remained etched on my brain and that make me glance at the night sky with some trepidation. As Stuart himself says, ‘Within the seasoned folds of the soufflé lurk sharp surprises for the unwary. Try it, you might develop a taste for something unexpected.’ 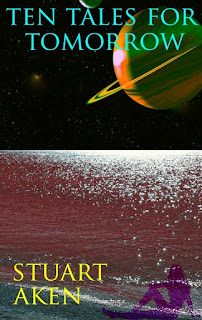 What I really want to know of course is what will come next from Stuart’s pen. ‘My epic fantasy trilogy for adults is well under way,’ he tells me, ‘with book one complete and book two undergoing the penultimate edit. Book three lurks in the fog of my subconscious, making increasingly frequent demands to be allowed to take material form. I intend to start writing that volume in the very near future. Also, I continue to produce short stories and, of course, make weekly posts on my blog.’

Stuart’s story, Rebirth, appears in the Fusion anthology but where else can his readers find him?

He says, ‘Find me, and my fiction, the only place I ever bend the truth and which, after love, remains my raison d’être, on my blog http://stuartaken.blogspot.co.uk/. This gives details of all my published work, with links to the outlets where you can buy them.’

Thanks, Stuart, it’s been a pleasure talking to you. Best of luck with the writing. Can’t wait for that epic fantasy to hit the shelves.

Stuart also has an Amazon Author page; UK readers can find it here and International readers can click on this link

And the last word goes to Stuart, who says, ‘Thanks, Dan and Gabi at Fantastic Books Publishing, for this opportunity to be part of your publishing concern. I wish you well with what I believe will be a very successful enterprise, bringing quality work to a growing circle of discerning readers.’