SAS-style grappling irons came flying over the sides of the bandstand. The last three guests swarmed up them and dived into their seats a microsecond before the bride’s foot stepped out onto the aisle. 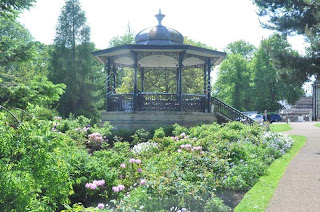 That’s how it was described to me by the groom’s other aunt. I was in no state to think up poetic descriptions. I was one of the three late guests.

We’d planned to arrive an hour early to give ourselves time to check into the hotel and get out of our travelling clothes, but a series of delays mounted up to our arriving minutes before kick-off, not knowing which hotel was which or where the bandstand was to be found. As we sprinted down the street, posh clothes on hangers streaming behind us, we caught a glimpse of a figure in white disappearing into the Pavillion Gardens.

Checked in so fast that I couldn’t find the room when I went back later, and we changed in such a blur of flying material that it’s a wonder we didn’t end up in each others clothes.

Dead on start time as we raced back out, hurling ourselves across the road and in through the gardens’ entrance.

We called upon passers-by to help out. ‘Have you seen a bride?’

We sprinted in pursuit, and caught up just as the music was starting, then managed not quite to elbow her out of the way as we dived for the bandstand. And no, we didn’t swarm over the sides. We climbed the stairs. And the ceremony began.

It all went beautifully, including the weather. Red hot with perfect blue skies. A wonderful setting. The couple with family and friends wandered the lawns with their Pimms and champagne. 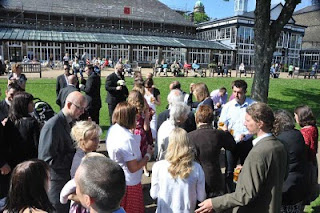 It never grew really cold even when the light began to fade mid evening, by which time most people were in the undercover part of the terrace enjoying the food, the music and the hula-hoop dancers.

Relatives who arrived more sedately and didn’t forget their cameras or have their phones confiscated (that’s a whole other story) lent me the pictures for this blog. They also wrote more coherent accounts of the day here and here.

Overall, a great time was had by all. Congratulations Alex and Nadine.
Posted by Penny Grubb at 20:40 No comments: