Today, the weather being pretty darned good, we took a trip out through the back of the wardrobe and entered a magical land where some of the bushes were decked out in multicoloured candy – look on the right up above the rocks

And where miniature kangaroos were in charge of public transport, except the one in the bucket who was doing something else 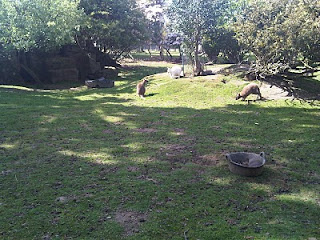 But as kangaroos are no good at timetabling, we had to walk. We didn’t mind because the sun was out and kept us warm. That is, until we reached the sinister tangled trees and had to run for our lives. 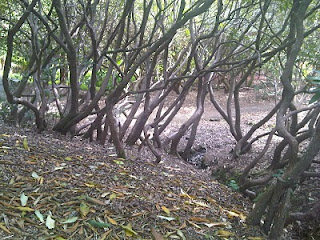 No kangaroos in sight now, of course, but thankfully we reached the wise old tree 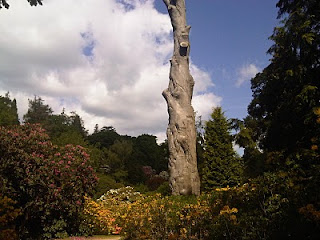 Who gave us a very stern glare but directed us to the bluebell wood where we found our way back home. 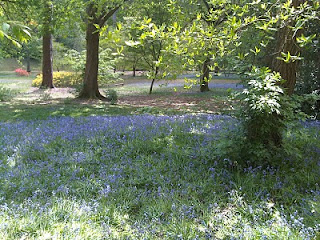 And lived happily ever after – natch.
Posted by Penny Grubb at 18:31 5 comments:

Email ThisBlogThis!Share to TwitterShare to FacebookShare to Pinterest
Labels: Life in Narnia

Had to rescue the cat from a bird this morning

That's not an error of wording.  We were woken fairly gently by that sound of kids rolling marbles down the roof - it used to mean squirrels in the loft, but these days it's heavy-footed pigeons.  Turned over to sleep again.  Then woken abruptly, going from sleep to standing in the middle of the room thinking 'what the hell...?'

Terrible racket from downstairs. A swishing and crashing, too loud to be anything benign; the sort of sound that if one is alone in the house late at night becomes a malevolent horde of demons released from an ancient burial ground to pillage the earth starting right here.  It being early morning and there being two of us, we recognised it just as soon as were over the shock of being tumbled out of bed.  The cat and a bird doing what cats and birds naturally do together.  But usually they do it outside.

We raced, bleary-eyed down the stairs, me to catch the cat, G to rescue the bird.  He has the knack of being able to catch a wild bird and grasp it firmly.  I get timid and end up with wings beating in my face and the poor thing even more terrified.

We expected feathers everywhere and the cat grappling to subdue the bird.  But not a bit of it.  It was a large black corvid doing that thing of trying to get out through a pane of glass; behind it a trail of debris from the hearth where it had come in (marbles down the roof must have been crow down the chimney).  And the cat cowering in a corner.

As soon as she saw me, the cat raced to my feet and begged to be let into the back room away from the beast.  I saved the day for her.  G had the winged terrorist in a firm grasp and outside.

We checked the evidence, but no need for forensics.  A clear trail from hearth to window, mainly an upturned pot of oddments (including a number of marbles as it happens), but nothing yukky to clean up, so the bird hadn't been frightened at all, just cross.

So, an interesting start to the day.
Posted by Penny Grubb at 07:42 3 comments:

We’re having a flood fest

Not the event planned for this week. Minor plumbing job pulled a seal loose in the big shower. Didn’t realise until water began coming to earth via an armchair downstairs. Then the little shower joined in. The cold tap in the bath wouldn’t work – not a flood but hoped it might be the third in the sequence. Real temptation to get the old tin bath in front of an open fire, but the old tin bath had concrete mixed in it years ago and we don’t have open fires any more – can’t do with all the hassle and ash. The third leak came along. It was in the roof.

Incongruous in this weather to have pots, pans and buckets all over the place catching water.

D, having repaired the roof (again) now doing rain dances so the repair can be tested. So far we’ve seen nothing of the forecast showers. The weather’s glorious and currently revving up for another beautiful day.

The up side of the flood fest is that we will now have plumbing that works (as opposed to works if you have the knack) in time for the wedding. There’s a statement to tempt fate.

The hens don't care about leaks.  I mention this to tag a photo. 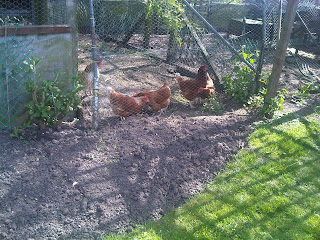 Cat, dog, snake and other animals

Including a stone hawk. And not for any particular reason, but here they are: 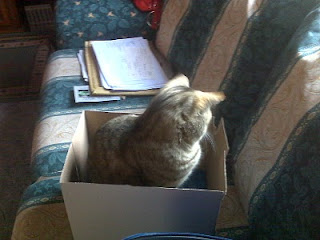 Cat in a box.  Don't know why she liked to sit in it so much, but she did, so it stayed there far longer than it should have by any good housekeeping measure. 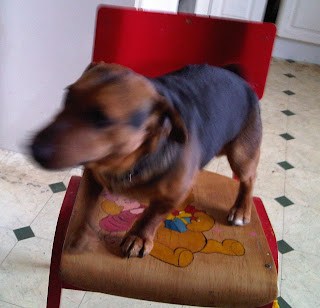 Dog on a chair, enjoying the attention but refusing to keep nose still. 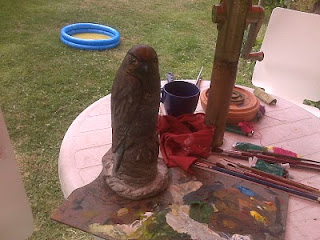 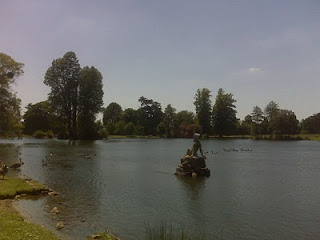 Snake swimming away, only I wasn't anywhere near quick enough with the camera. I can see it, but really you had to be there. 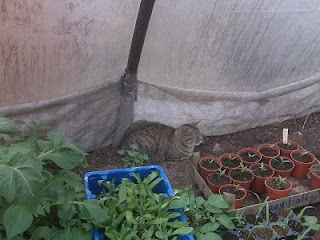 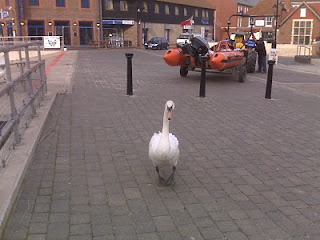 Swan guarding the lifeboat... and that's the lot.