For the story so far, see the previous blog HERE.

The latest government statement gives a clearer view of the situation than any previous official document. The link to it is below*. Change.org has a useful overview HERE and I have several points to make about it myself:

My own view remains that this piece of legislation was reasonable in its aims to curb VAT avoidance on the part of big business but that the people who developed it forgot or disregarded the effect on micro-businesses. Now this has been pointed out, instead of repairing the damage, they have made it worse.

The government statement* differs in some key respects from the official view being given only a few days ago. The position on VAT registration is at odds with the version I was given when I spoke directly to the UK VAT Office a couple of weeks ago.

It looks to me as though the realisation has finally hit home that something dire is going to happen to micro-businesses and someone has taken some action.

The reaction should have been to put in place the measures to protect micro-businesses (the measures that are already in place in respect of current VAT regulations). Instead, the move is to make a minor amendment with respect to UK VAT registration and then to spell out in excruciating detail how and why micro-businesses may as well shut up shop.

The minor amendment is to allow micro-businesses to become VAT registered in the UK and provide nil returns whilst they remain below the VAT exemption threshold. This gives them access to the one stop shop provision for EU VAT.

This looks like a step in the right direction but it does NOT solve the problem. It does not even come close.

Every affected micro-business, sole trader, small cooperative, voluntary organisation must take on the burden of VAT registration. Being able to provide nil returns on UK VAT does not equal zero bureaucracy. And that’s the easy bit. Here’s a less easy bit:

Every sale into another EU country must be identifiable. That’s easy if you’re an Amazon or a Google, you have the resources to run country-specific sites. Some micro-businesses might be able to do this, many won’t. But let’s assume the sale can be identified, then what? The VAT can’t have been added to the original invoice unless the system is sophisticated enough to determine country of origin and current VAT rates at point of sale. I could go into the details of why that is technically infeasible for a micro-business, but won't. The result is that either the VAT comes out of the micro-business’s pocket or the micro-business puts prices up across the board to cover 27 potentially different VAT rates.

The choice is stark: make yourself less profitable or less competitive.

It is the nature of micro-business that when it is micro it operates on a shoestring – there isn’t the slack to pay all its customers’ VAT bills or to make itself less competitive by across-the-board price rises. The Amazons, Googles, Apples, etc of this world couldn’t have done it when they were micro-businesses.

Why is our own government pulling up the drawbridge to deny current entrepreneurs the means to make their mark in the digital world?

You might be thinking that the pricing issue though tough, is surmountable. And you might be right. So now for the hard bits.

For every sale to someone in an EU country, a micro-business must keep two non-conflicting pieces of evidence of the buyer’s location. That’s EVERY sale. The evidence MUST show the buyer’s country.
Let's work this one through: a small cooperative sells MP3 downloads to raise money for its cause. It uses an automated online ecommerce system because otherwise it would be unable to afford to operate. A buyer in Spain pays for and downloads a single product for 99p. There are alternatives here so let’s unpack them.

Some of this evidence by way of billing addresses and so on might be gathered fairly painlessly. However, in order to comply with the law, every transaction must be checked to see if it is a) from one of the affected countries and b) to see if the evidence of origin matches. That in itself is a huge administrative burden.

Can’t this be done automatically? Yes, if you have the resources of an Amazon or Google or Apple. If you’re a sole trader then you will have to devote significant time to this that would otherwise be spent building your business. Your business will suffer for it.

And it doesn’t stop there.

The requirement to keep hold of these pieces of evidence puts you under the Data Protection regulations. “You will need to register as a data controller” – quoting HMRC again. This requires an annual fee – not a huge one but yet another cost on top of the extra red-tape you are now having to resource for every sale – and puts you and your business under the extra burden of the bureaucracy that goes with data protection registration.

In my view it is foolish to advise anyone to rush into VAT registration without being fully aware of the administrative burden or potential legal pitfalls – there are many. As a micro-business the effort required to ensure full compliance is likely to be so detrimental to the business as a whole that it becomes pointless. Being a VAT registered business is burdensome enough; being a VAT registered bankrupt business is even worse. The same caveats apply to registration under Data Protection.

*This is the latest from HMRC
https://www.gov.uk/government/publications/revenue-and-customs-brief-46-2014-vat-rule-change-and-the-vat-mini-one-stop-shop-additional-guidance/revenue-and-customs-brief-46-2014-vat-rule-change-and-the-vat-mini-one-stop-shop-additional-guidance

This move is a clear demonstration of the lies in the statements that "the change was agreed in 2008 and we've done a lot to communicate it to businesses" and that the inclusion of micro business was not an oversight. Had micro business been thought of from the start, this move would have been thought about in 2008 or earlier, not in late 2014. Had it been thought about in 2008 or earlier there would have been time to see that it is no solution to the problem of destroying small businesses.

Responses since late 2014 have brought to light that very many VAT registered businesses had no idea of the forthcoming changes and neither had their accountants, legal advisers or professional bodies. The only people who seem to have been kept in the loop are the big businesses who stand to gain a lot by mopping up the customers and sales that small businesses will no longer be able cater for legally.]
VC says: “UK sales will be unaffected.”
The reality: online sales don’t take account of borders. The sorts of ecommerce systems used by micro-businesses don’t have the sophistication of systems used by huge multinationals. The reality is that if a trader puts something on their ecommerce platform, it will be accessible across borders. What is the small trader to do? Manual intervention in all online sales is a theoretical solution (because automatic intervention to cater for the possibility of 27 different VAT regimes is a technical add-on way beyond the purse of a micro-business). I say a ‘theoretical’ solution because on the whole the only way a micro-business can realistically run an online operation with any hope of eventually growing to become a big business is to have its online sales automated. Result again is loss of business and loss of revenue.
More businesses go under. Fewer businesses grow from micro to small to medium to large. The knock-on effect is fewer jobs and more people thrown out of work. And all because the politicians made a mistake that they now  refuse to acknowledge. The VAT exemption threshold would sort it all out at a stroke.
VC concludes by saying: “Hope that helps clear up the change.”
I am unable to respond to that without profanity.

The new book Buried Deep sees the light of day and not before time. This one has had a chequered history as related in the annals of Hornsea Writers, but it's here now. 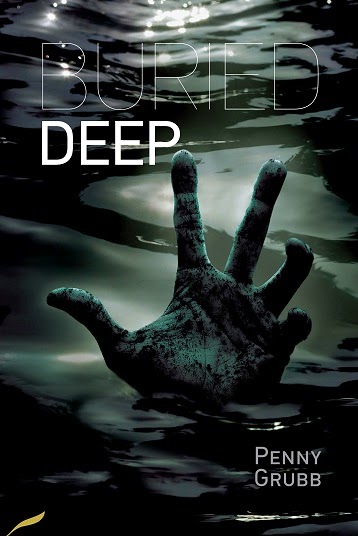 Surrey-based Damien Marks has no idea that his wife has employed a private investigator to check up on him. And she has no idea that a police team in York sees his inexplicable behaviour in a far more sinister light and have him in their cross hairs as the prime suspect in a murder enquiry.
Detective Superintendent Martyn Webber is appalled to find private investigator Annie Raymond slap bang in the middle of his case. Not that he takes her seriously, but he has his own secrets that he can’t afford for her to find. Then the death of a peripheral witness turns the investigation on its head.
Meanwhile, oblivious to the entanglements of the adult world around her, schoolgirl Olivia Lamb hugs to herself the secret of the ghost hands she saw in the surging waters of a York flash flood.
eBook available from:
Fantastic Books Publishing
Amazon UK
Amazon USA
Posted by Penny Grubb at 13:18 2 comments: