Marking the pandemic lockdown with Boxed In 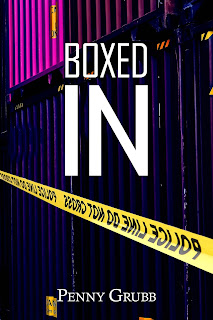 Boxed In has been the working title of this book since its inception in 2018/19 - before the words lockdown, pandemic, covid, furlough and distancing were in constant use. The action takes place before the 2020 pandemic, but only just, which is an aspect I explore in the author's note at the end. It leaves a bit of a dilemma for the next one.

Officially launched on 20th March 2021, the one-year anniversary of the start of the first lockdown in the UK, Boxed In follows the fortunes of private investigator, Annie Raymond, and police officer, Jennifer Flanagan in the streets of Hull, East Yorkshire and North Lincolnshire.

The book is available in advance in paperback. The ebook can be pre-ordered for delivery on launch day.

The Defiant Spark by Annie Percik
My rating: 5 of 5 stars

In The Defiant Spark by Annie Percik, technology is powered by mana (essentially by magic, though that’s not a term that is used in the book). As in our own world, the artefacts that facilitate routine living: cooking cleaning, travelling, gaming etc, go wrong. Devices break down, jealousies erupt over bigger and better versions. Percik dives into a side of magic worlds that is usually glossed over or forgotten; the world of customer service, complaints and call centres.

Protagonist Abelard is a humble mana engineer who works in a call centre and lives in a run-down apartment. His dream was to make the leap to becoming one of the elite band of artisans. Convinced he had the skills, he and a friend applied to take the tests, but failed at the first hurdle. Abelard is resigned to a humdrum existence though he hankers after someone to share his life.

An accident on a routine call-out almost kills him … and changes his life. Not only has he met someone special, but the world of the artisans is suddenly within his grasp.

Is that his ‘happy ever after’? Hell, no! The material improvement in his life is as sudden as the disturbing revelations that start to pull the privileged rug from under his feet almost the moment his toes touch the weave.

He is bullied, threatened; he looks set to lose the only true friends he had, and he makes an inadvertently human contact with a robot, quite unaware of the problems that he has unleashed and the unintended consequences.

The relationships within the book look set to take a particular course, but don’t be fooled. Things quickly take an unexpected turn. And if you then feel with some satisfaction – as I did – ah ha, that’s how it’s going to end up, think again. There’s a twist that takes things in another direction. I wondered at a sci-fi novel launching on Valentine’s Day, but within all the machinations, there are more than enough tangled relationships to justify the launch date. And there’s a satisfying feel to the unconventional but convincing resolution.

(Reviewed prior to launch from an advance reading copy)

View all my reviews
Posted by Penny Grubb at 15:49 No comments: