Joinings: A Seared Sky. Couldn't put it down

Joinings: A Seared Sky by Stuart Aken
My rating: 5 of 5 stars

Joinings is the first book in Stuart Aken’s Seared Sky trilogy. And that guarantee of more to come will be music to the ears of fantasy fans. It is hard to imagine anyone getting to the end of this and not thirsting for more.

The opening scene is gripping. It hooked me in and then I was compelled to read the rest. Aken weaves a complex tale through a meticulously constructed fantasy world showing us fascinating glimpses of different ways of life, different beliefs.

The dangers of a society in thrall to superstition and corrupt government are well drawn, as are the characters. There are no pantomime baddies here, no clichéd heroines, but well-rounded characters whose destinies we can’t help but follow. Tumalind and Okkyntalah; Dagla Kaz, Jodisa-Li, Aklon and the rest of the cast create a very real world with real problems and challenges. But it doesn’t get lost in big picture stuff. There are solid and compelling human stories at the core of this excellent book.

The only real problem: it’s a big book and it’s hard to put down. But when it comes to book, that’s just the sort of problem I love to be faced with. I’m watching out for the next.

The light behind was fading, the darkness pressing in, pushing the silence so close that he feared he might suffocate in it. 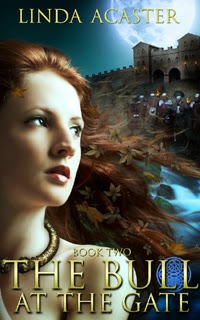 Stephen King is a writer who has forged a stratospheric career from weaving the paranormal into his novels. He says, ‘An opening line should invite the reader to begin the story. It should say: Listen. Come in here. You want to know about this.’

Do you agree with King and why did you choose this as the opening for The Bull At The Gate?

It’s all about engagement. In the trilogy, landscape plays a subversive role, and at the opening I needed the reader to engage on an emotional level with the character, only picking up snippets about who he was, and where and when he was, as the scene progressed. A sense of claustrophobia is something that stalls most of us, even if for the reader, who is perfectly safe, the sense is irrational. Sort of.

Stephen King is able to portray the everyday mundane, lulling readers into a false sense of security as they learn about the life of a person just like them. It is difficult to identify in his writing where the normal blends into the paranormal until the reality has fully shifted and there’s no way back. That’s a skill I admire.

How does a novel come into being? The world’s most successful ever crime novelist Agatha Christie hated being asked to talk about her writing process. As she said, ‘You think of an idea and force yourself to write it.’

You clearly knew you were writing a trilogy when you wrote the first book, Torc of Moonlight, so presumably you already had the ideas for the next two books. 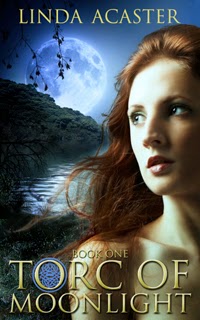 Is Christie right? Is it the actual writing that’s the bit you have to force out of yourself? And does this mean your readers are in for a long wait for no 3?

Hopefully not too long a wait – LOL! As it happened, no, I didn’t have the two further books mapped when the first was in embryo. I knew where I wanted to end the story, but as the writing progressed I realised I wasn’t going to get there in under a tome no one would want to publish or hold. My agent at the time was adamant about it being a stand-alone which coloured my thinking for a while, but freed from those shackles it was allowed to take on its own life, which I’ll never regret. The two subplots made it to parallel storylines, and I’ve kept to that symmetry for the trilogy.

As to forcing myself to set words on paper, it often feels like that. I’m juggling a puzzle as any crime-writer does, and nuance plays an important part. I want readers to stop during the reading and think Of course! Why didn’t I see that earlier? Nuance can’t be written in afterwards as one begets another, so there is no ‘fast and dirty draft’. It’s all hacking it from the granite page with a plastic spoon.

Where did it all start? Novelist Barbara Taylor Bradford says, ‘For me it all starts with a memorable character.’ Where did this trilogy start for you? And once the trilogy was off the runway with Torc of Moonlight, did that give you the starting point for The Bull At The Gate and the yet-to-be-named book 3?

I agree there; a memorable character it was. While reading a piece on ancient water lore my experiences walking the landscape jumped into sharp relief. People believed that sacred waters were guarded by female deities. Just because we, with our modern plumbing and sewerage systems, don’t share their world view, who are we to say they were wrong?

I find it interesting that the ‘memorable character’ which has such an influence on all three books, hardly makes an appearance, rather I feel, the way it must have been at the time. It is in exploring the mismatch of belief, non-belief, and demonisation of a pre-Christian deity that has proved such fertile ground for the trilogy. If you are a modern person caught in the middle of this, what do you believe, how does it affect you, and who do you go to for aid?

Thank you, Linda, for some fascinating insights into your writing processes. For anyone who wants to know more, please leave Linda a question or comment below. Linda has offered a giveaway to readers of this blog. She will pick someone from amongst those who comment and send them both books for free. Watch this space! [Draw now closed; thanks to everyone who participated]

The Bull at the Gate is available for all ereaders:
Amazon Kindle
iBooks
Nook
All formats

To find more information about Linda, her other novels, her alter-ego Tyler, and her many writing credits visit her website.

Book review: The Bull at the Gate

The Bull At The Gate by Linda Acaster
My rating: 5 of 5 stars

University graduate, Nick Blaketon, takes a job at the University of York. It’s all part of his survival strategy to get over the traumatic death of his girlfriend, Alice. His parents see it as a positive move, but not everyone is as easily fooled. The very fact he has chosen York indicates that far from making a proactive step to move on with his life, he has very different plans.
In the same place but centuries earlier, retired Roman legionary Vibius Fulcinius, now Keeper of the Temple of Luna, metes out a gruesome punishment to an initiate who misjudges temple etiquette.
In modern York, Nick finds a silver plaque that holds a key to the secret he seeks, but he’s too naïve to recognise that its condition marks it either as stolen or as a deliberate counterfeit. He can’t explain to his co-workers where it came from. He barely understands it himself. When a colleague goes missing, Nick’s odd behaviour is under the microscope. The police ferret out the strange details of Alice’s death, and suddenly Nick is in very deep water, which has a certain irony, as it was a shrine to a water goddess that Alice was seeking when she died.
While Vibius fights to protect the sanctity of the Temple of Luna, Nick and his workmates brush shoulders with ancient rites of passage. Lines blur through the layers of history that make up modern York, where Roman temples built with stone plundered from ancient shrines are still out in plain sight to the 21st century eye. The annual Jorvik Festival plays backdrop to mounting tension as the plotlines weave towards their conclusion. It’s a fast-moving paranormal thriller that will raise the hairs at the back of your neck as it becomes clear that there is no going back for Nick. In taking his first tentative step on this journey, he slammed the door behind him. The only question is whether he can summon the strength to solve the puzzle in time to influence the outcome and prevent another tragedy.
Following Nick through modern York, and Vibius through Roman York gives a real sense of this historic town, with the weight of history bearing down from all sides.
The Bull at the Gate is the second of Linda Acaster’s occult suspense trilogy featuring Nick Blaketon.