#justimagine Author Brad Greenwood on Fusion, films and the desire to write

Introducing Brad Greenwood, whose day job is in films and who writes speculative fiction in his spare time. Brad began work in the Australian film industry after graduating from the Queensland College of Art in 1990 and he has built an impressive CV, having contributed as a designer and artist to many projects including Peter Jackson’s Lord of the Rings, George Miller’s Happy Feet and Zack Snyder’s Legend of the Guardians. He is currently art directing the animated film Blinky Bill. 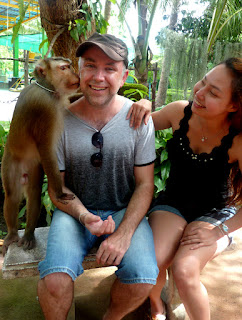 Brad’s contribution to Fusion is the story The Monkey’s Kiss, a clever angle on one of sci-fi’s favourite themes. Brad’s film background shows through the structure and atmosphere of the tale. And look no further than his photo above for one source of inspiration.

When I ask how Brad felt to hear that his story would be published in the Fusion anthology, I am amazed to learn that this is the first short story contest he has entered. He tells me, ‘I was genuinely surprised when I made the short list, and received an email from Fantastic Books Publishing saying that my story would be included in the anthology.’

The quality of his writing shows he is no beginner, so what was it that made him enter this competition? I ask what was the greatest motivator: the cash prizes, the chance of publication, the charitable donation or maybe none of these things. Brad says, ‘I think those are all great incentives but it was really just the desire to write something and put it out there that motivated me to enter.’

On the topic of the anthology’s invited contributors, Danuta Reah and Stuart Aken. Brad says, ‘Danuta and Stuart are incredible writers. I’m not really sure that I should be published alongside them but I am thrilled to be!’

I’m happy to assure Brad that his success was well-deserved and that The Monkey’s Kiss deserved its place in amongst a set of excellent stories.

In common with all the shortlisted authors, Brad worked with the Fantastic Books Publishing editorial team to polish his story for publication. How did he find this process? He says, ‘What impressed me with the editorial feedback from Fantastic Books Publishing was how concise, intelligent and well articulated the notes were. The notes were incredibly helpful in delivering a better story.’

What would Brad recommend as a compelling read, the sort to make a long-haul flight whip by in a trice? He says, ‘Actually I just finished reading Malcolm Gladwell’s ‘Blink’. It is non fiction but a compelling read.’

And now I ask Brad to put himself in the shoes of a space scout for an alien race. He has discovered Earth and learned its history. Will he tell his people to make contact? I find his answer one of the most perceptive I’ve had to this question. ‘Human beings at their best are compassionate, fun loving, creative and spiritually curious. At their worst they are self destructive, culturally intolerant and politically manipulative. I’d keep an eye on them and check back in a few hundred years!’

And of course I want to know what Brad is writing now, and I’m pleased to hear that the Fusion experience has inspired him to write more short stories. As to the current writing project, he says, ‘It’s going…but slowly.’

Don’t leave it too long, Brad. You have an army of fans out there now.