First night in Istanbul we took a stroll down from Taksim Square to find a hotel that had had a nice olde worlde look to two colleagues who'd arrived the day before and already been exploring.

And it did have an air of old-fashioned elegance. We were the only diners in the upstairs restaurant but it was a hotel and we reasoned that they probably did a brisk trade with their guests. We hoped so because if this were the norm, we were eating in a place avoided by the general populace, locals and tourists alike, and heaven alone knew how long the 'slow-cooked' beef might have been cooking. I got to know too because I ordered it. It was wonderful. All the food was wonderful, the place was spectacularly grand, the service was exceptional as we were the only diners.

It wasn't until the end of the evening we realised we were in the Agatha restaurant of the Pera Palace Hotel - the place Agatha Christie wrote or plotted or first thought of Murder on the Orient Express. We should have visited the station, too, but didn't.

Ataturk had stayed there, also, and the hotel now includes an Ataturk museum in the room where he stayed. An inadvertently appropriate choice for dinner at the start of the IFRRO conference. 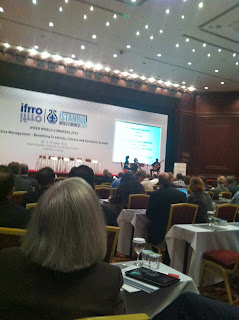 The place was just in sight of the lights of a huge football stadium, where a huge match was in progress. Some in our party suggested opening the windows to see if we could hear it. Apparently it was significant in the football calendar. I understand someone won (or not).

A peaceful start to the trip and just the ticket after being battered by storms on the long journey in.

Later in the week we tried a kebab house - all squashed in on the tiny third floor with 60 other people. The lower floors were already packed when we arrived, but we'd booked in via a recommendation. Another wonderful meal. And our final evening was in one of the many restaurants that crowd the numerous alleyways of Istanbul and where the proprietor allowed me to have the candle holder to add to my pointless box collection. 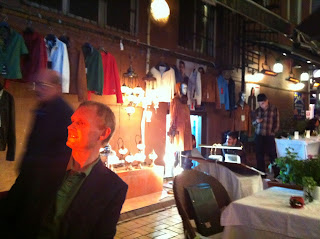